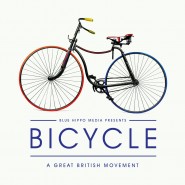 'Bicycle' is a feature length documentary film about the history and impact of the bicycle in Britain.

It is currently on limited release in cinemas across the UK .

The film is in association with Trek, Shimano(presented by Madison), Birmingham Cycle Revolution and Bicycle Association

The film has been directed by Bafta award winning Michael B. Clifford. The film Premiered at the Grand Depart in Yorkshire for the 2014 Tour de France.

”Bicycle” asks the question why is cycling and the bicycle back in fashion? Why the current Zeitgeist? The film explores these themes and tells the story of cycling in the land that invented the modern bicycle, it's birth, decline and re birth from Victorian origins to today. The film weaves bicycle design , sport and transport and features interviews with notable contributors like Sir David Brailsford, Gary Fisher, David Sproxton, Dannielle Khan, Sir Chris Hoy, Mike Burrows and Chris Boardman and many more plus music and archive, animation and live action from cycling culture now, “Bicycle” is a humorous, lyrical and warm reflection on the bicycle and cycling and its place in the British national psyche.

Go to the website to view cinema screenings / order the DVD or obtain a film license.